The Domes Village is a series of four dome-like structures – each with its own theme – linked by suspended bridges, and located in the River Park in New Clark City, Philippines. Both a large-scale outdoor art installation to be visited and a playground to be explored, it forms an interactive site of creativity and play for both children and grownups. The domes are made out of reclaimed hardwood from old houses, using skilled carpentry, combined with custom-made and computer-machined steel connections, and designed using parametric modelling. It is a marriage between vernacular forms and high-tech precision, made possible by the international collaboration between Silverlens Galleries, local artist Bernardo Pacquing, Rotterdam-based designers Superproject and ourselves.

Summum Engineering assisted Superproject and Silverlens in the design and construction process, and provided structural engineering of the domes and bridges. The entire workflow relied on joint parametric modelling, directly connected to engineering software. A study of Philippine and American code was carried out as the former did not fully provide guidance for every aspect of these unique structures. Some recommendations for the design were made based on European codes for playground equipment, to ensure safety during use.

The River Park is part of a new city under development by the Bases Conversion Development Authority (BCDA). The entire property is designed to accommodate up to 1.2 million people and was envisioned as a business development with wide tree-shaded pedestrian lanes, free of gated communities and with smart and disaster-resilient features. The city’s Sports Complex and River Park, including the Domes Village, had to be finished in time for the country’s hosting of the 2019 Southeast Asian (SEA) Games. The project was extremely challenging as design, engineering and construction took place over the course of eight months, in order to meet this strict deadline for completion.

The brief was to build structures that would endow uniqueness to New Clark City and that could be enjoyed by visitors to the River Park, allowing them to playfully experience and learn about the possibilities of reclaimed materials. The domes were built from reclaimed endemic hardwood – molave, guijo and yakal – and linked by way of suspension bridges.

Silverlens Galleries approached Jasper Niens in early 2019 to realize the initial sketches by the gallery’s artist Bernardo Pacquing. The artist’s intent was to hark back to prehistory, when domes provided shelter to the first civilizations, emphasizing the relevance of resilience, interconnectedness, and strength. The Domes Village is a message in wood to defy time and stand against the elements.

Armed with the brief and sketches provided, a parametric interpretation was made to produce physical structures that were rigid enough to support the suspension bridges, whilst also adhering to the main requirement, which was to utilize reclaimed timber as its primary construction material. 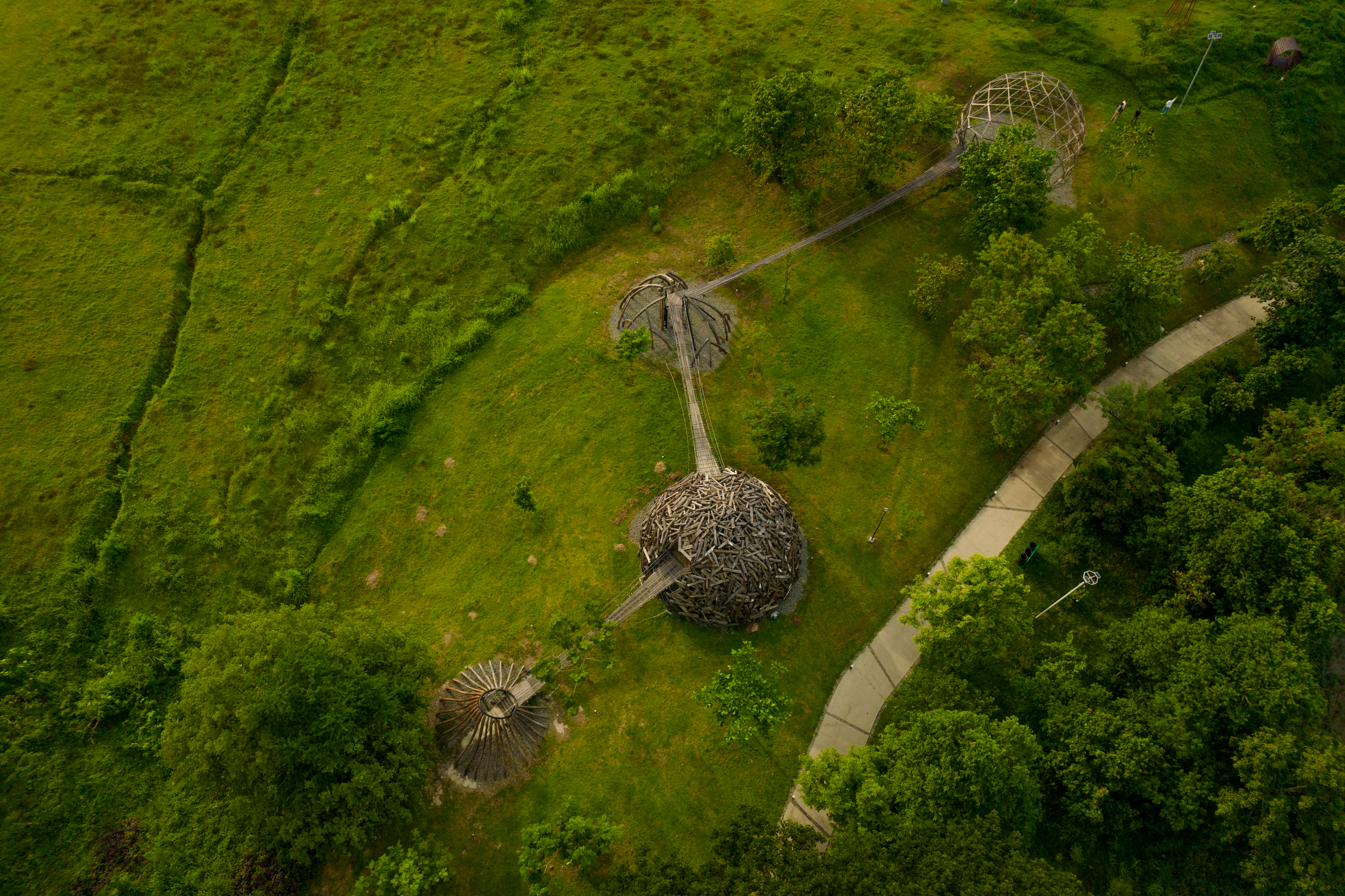 The challenge was to execute the precision of the parametric designs with the skills, services, tools and materials available in the Philippines. Although some of the steel components were digitally fabricated, most of the components were produced manually. With the design team working out details in the Netherlands and the construction and management team on site, a lot of effort went into adapting and translating the parametric designs into building plans that could be grasped and produced by the local carpenters and steel fabricators. The results were plans that esthetically adhered to the artist’s vision and, at the same time, took into consideration the loads that the structures would have to contend with during their life-time. 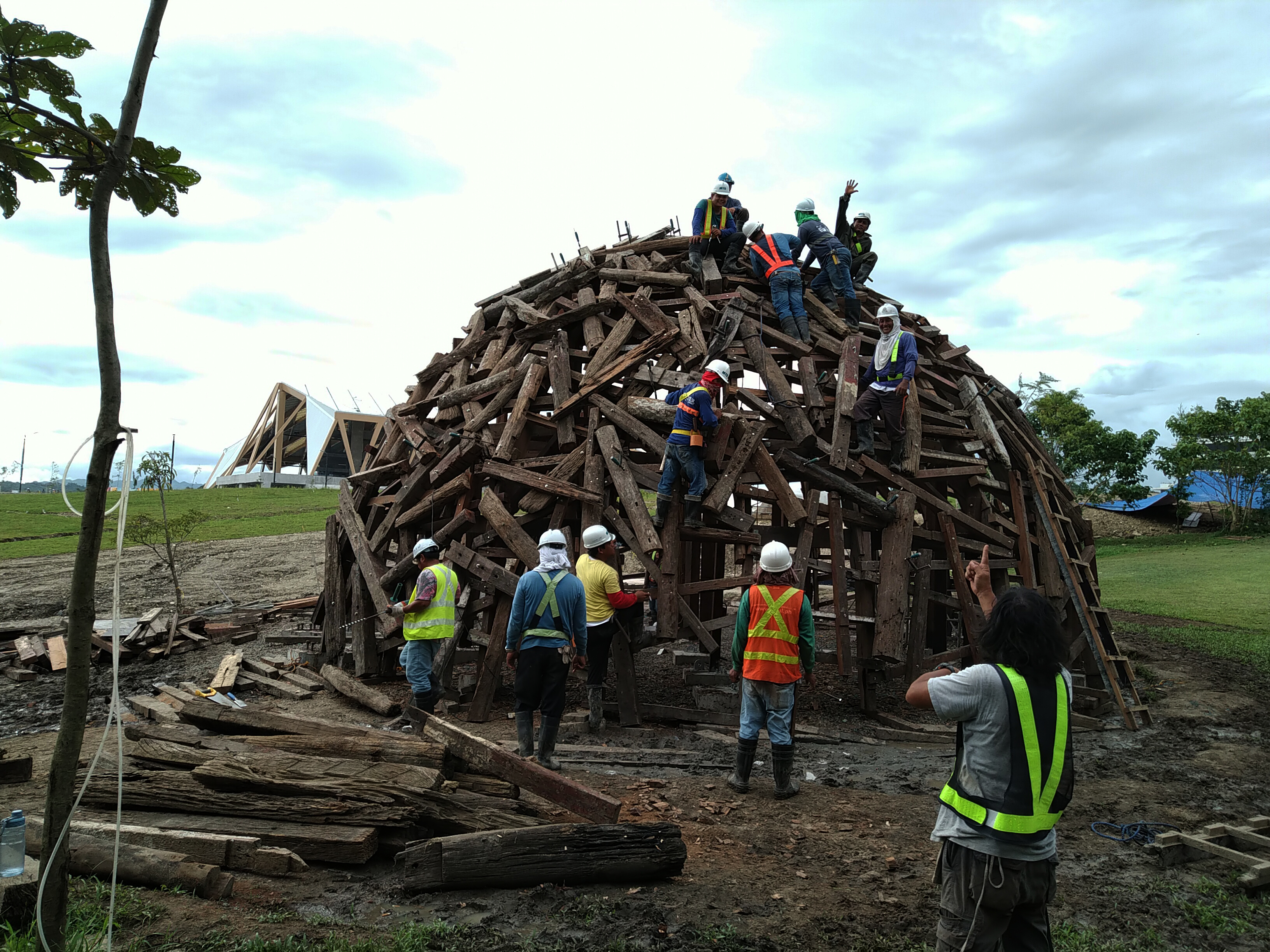 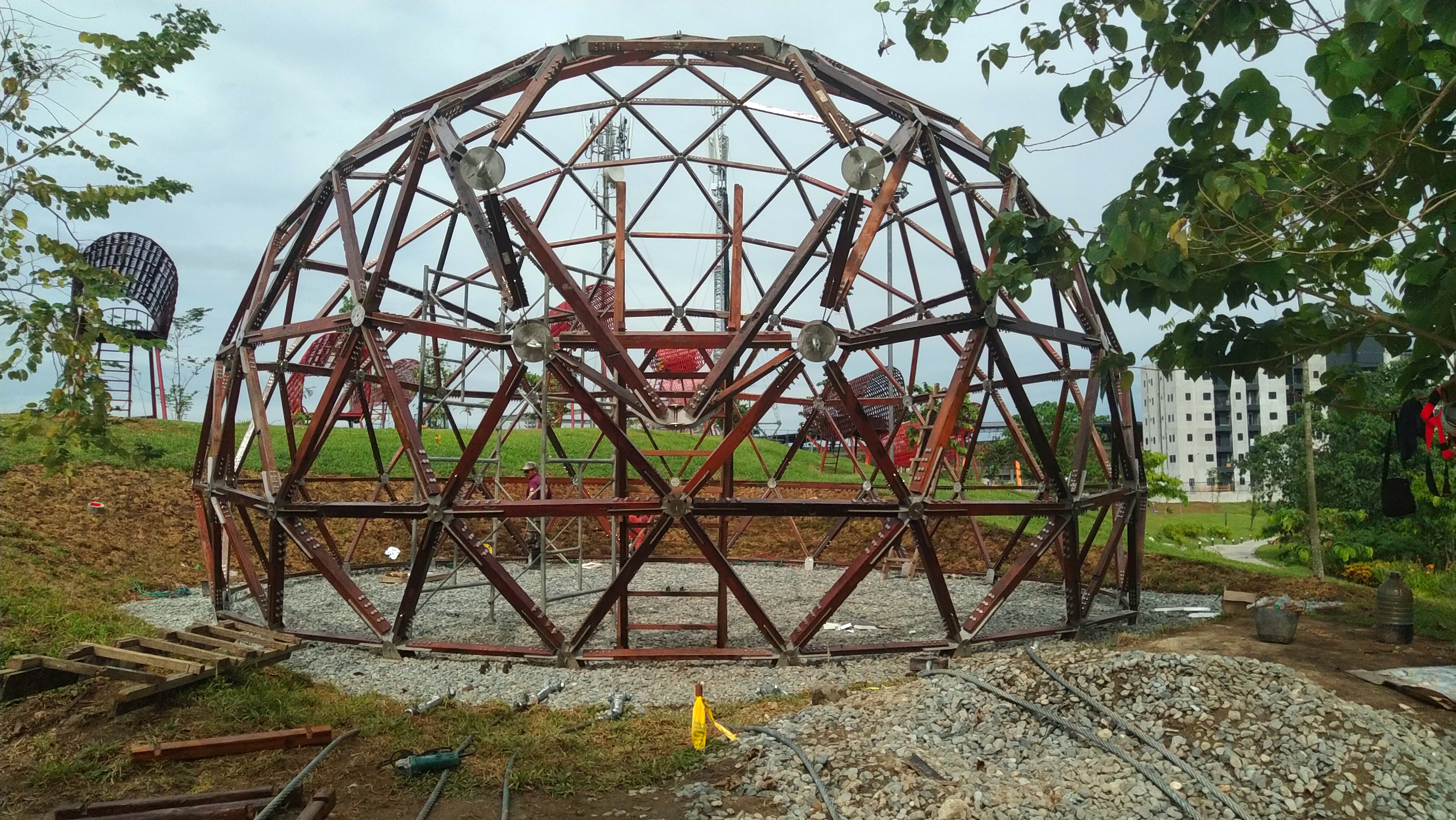 The reclaimed timber originated from locations scattered all over northern Luzon and was mostly retrieved from old and antique houses demolished to make way for new developments.

Each piece of timber had to be visually graded for quality and its species identified. Several samples were identified and mechanically tested by the Forest Products Research Development Institute (FPRDI). An exhaustive study of academic Philippine literature was carried out, to convert their test results for use as design values in the Philippine code (NSCP) – knowledge that had been lost over time.

The Domes Village consists of four structures connected by three consecutive hanging bridges, occupying an area of approximately 50 by 50 meter. The structures are circular or spherical in design, and referred to as “domes” for that reason. The architecture between the domes varies, and refer to natural or mathematical forms: the ‘coral’ dome, the ‘natural’ dome, the ‘mangrove’ dome, and the ‘geodesic’ dome. The suspended bridges connect the domes, creating a path to follow along the entire installation. The bridges, spanning between 12.4 and 28.2 meters, are made from steel wire rope and reclaimed timber boards. 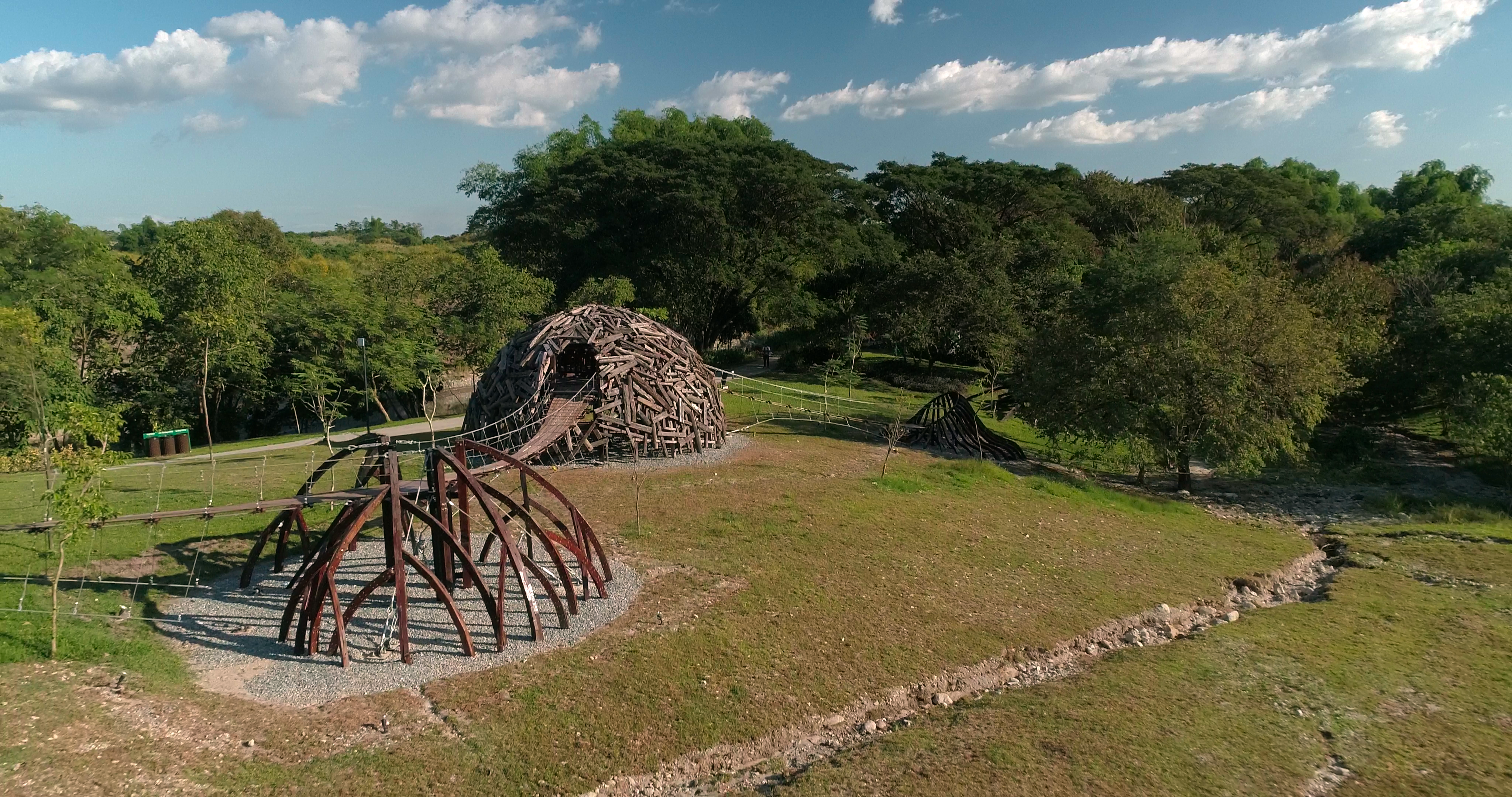 The coral dome is inspired by fungia corals, which are found growing in the Indo-Pacific, and are composed of radiating, vertical skeletal plates, called septa. The dome has a diameter of 6.5 meter and a height of 3.2 meter. It consists of 35 radial, curved timber ribs and a central steel ring structure. It is possible to enter the dome between the ribs, and step onto the first bridge through the ring. 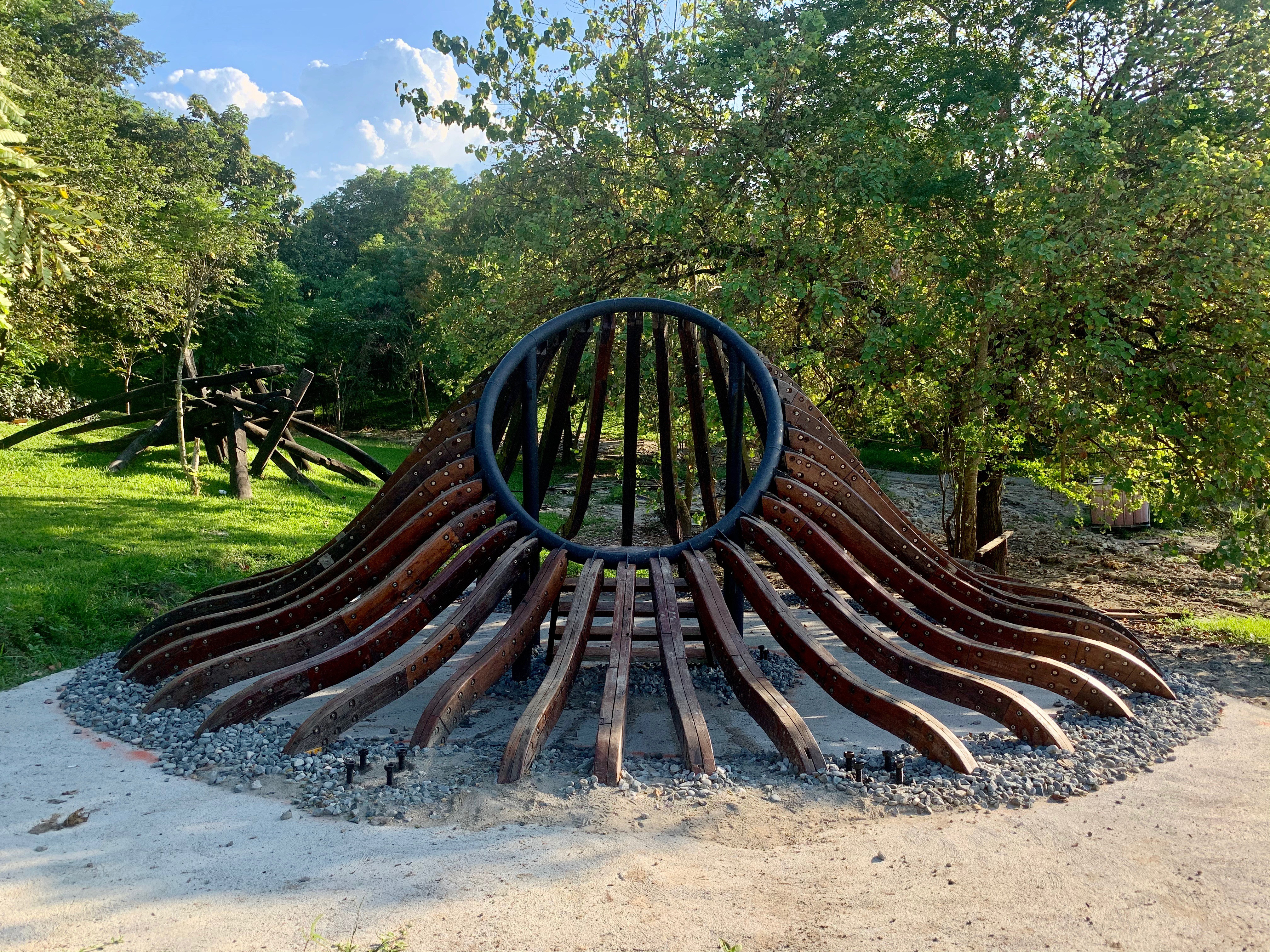 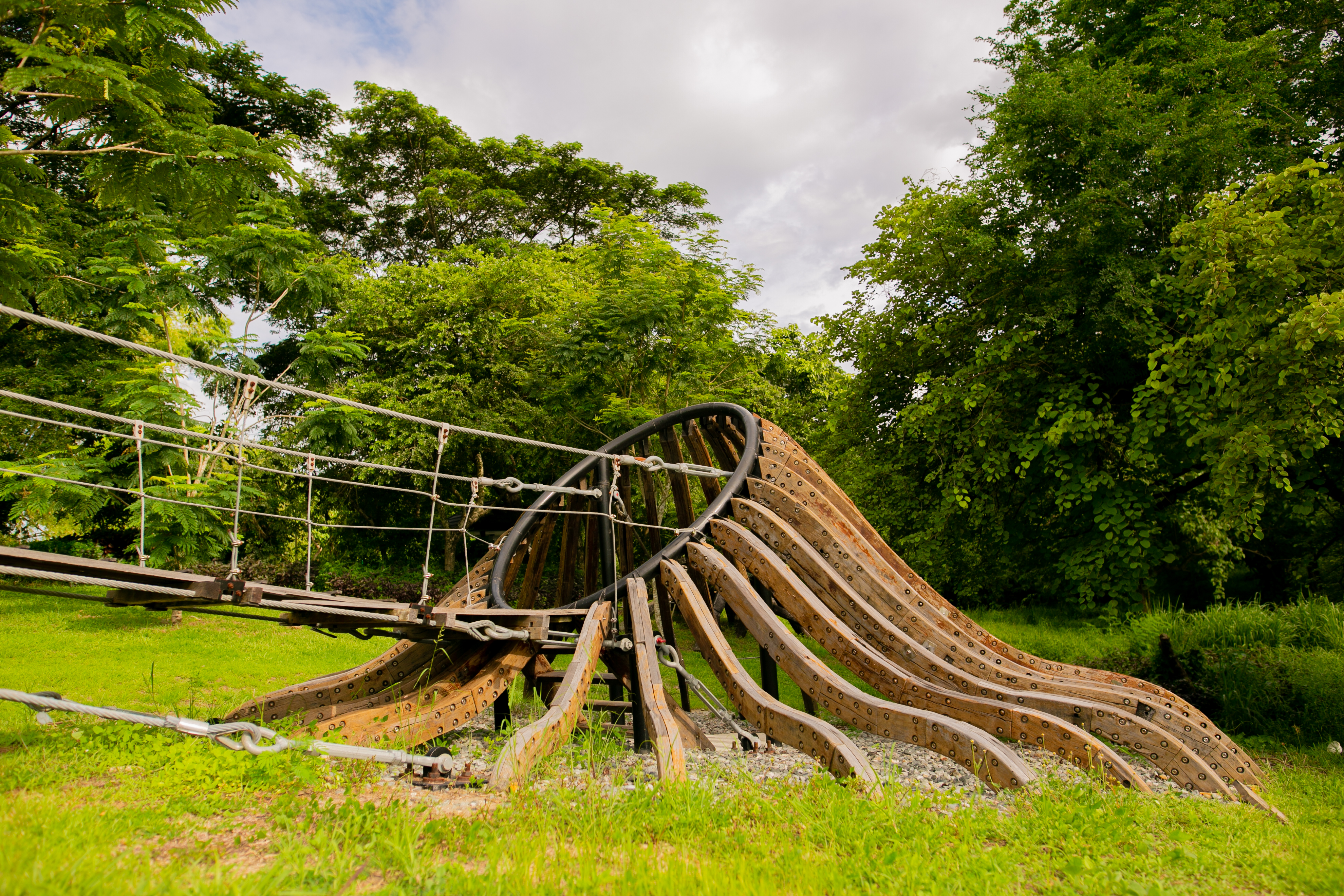 The natural dome is the next iteration of Pacquing’s earlier 2018 ‘Earth Mound’, a 3 meter high structure made of locally found driftwood, based on his fascination with domes and termite mounds. The natural dome is 5 meters high with a 10 meter diameter, entirely clad with reclaimed timber, placed in arbitrary fashion. The cladding hides a hexagonal interior post-and-beam timber structure, that connects the first and second bridges by a raised platform. 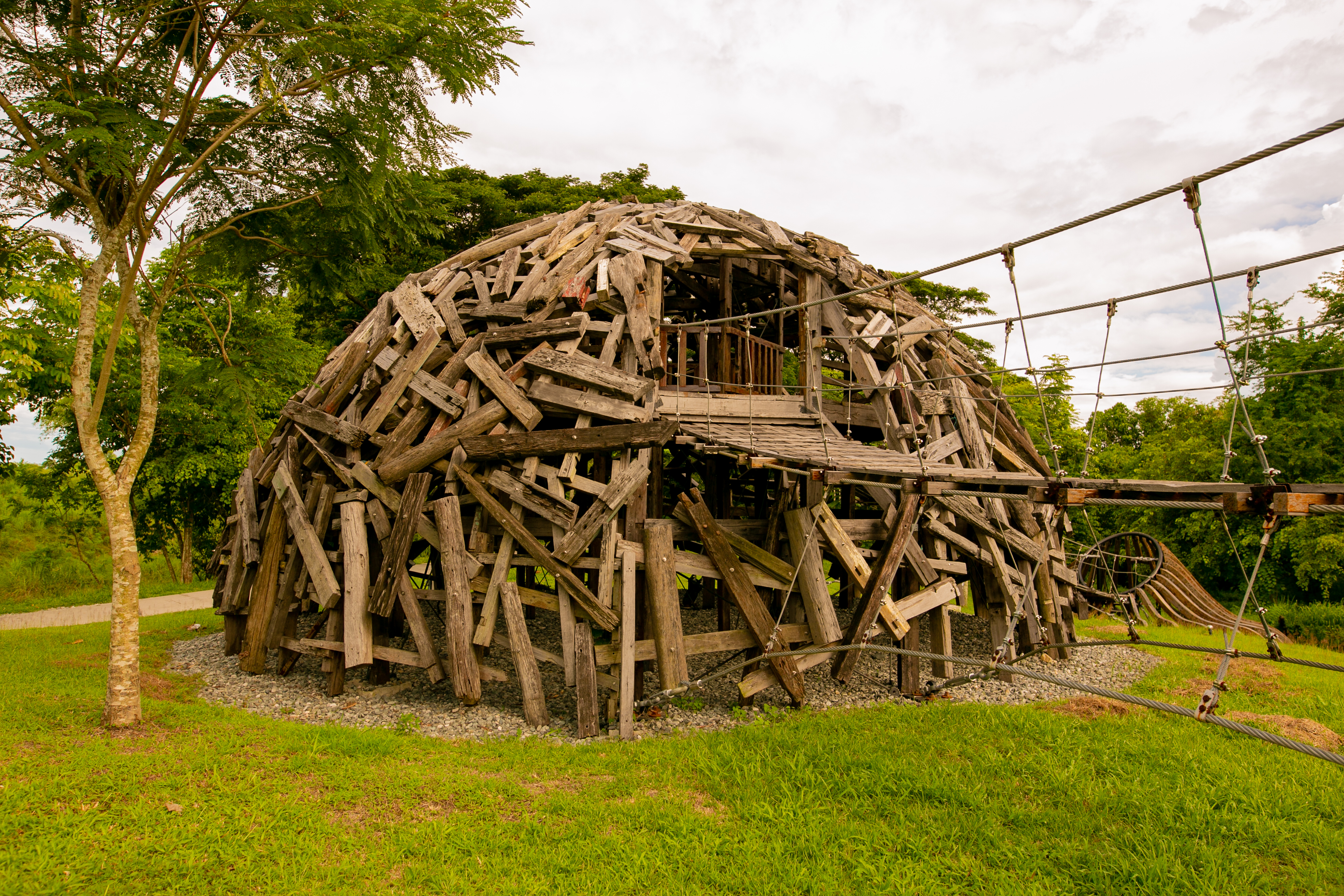 The mangrove dome refers to the small mangrove trees that typically grow in and near coastal water. Their stilt roots prevent them from being uprooted by tidal and wave action. The dome is 3.9 meters high, occupying a 6.6 meter circular area. In its center, a diamond-shaped deck forms a steel structure connecting the second and third suspended bridges. Root-like ribs, composed of segmented timber, seem to grow outward, grounding the platform to its surroundings. 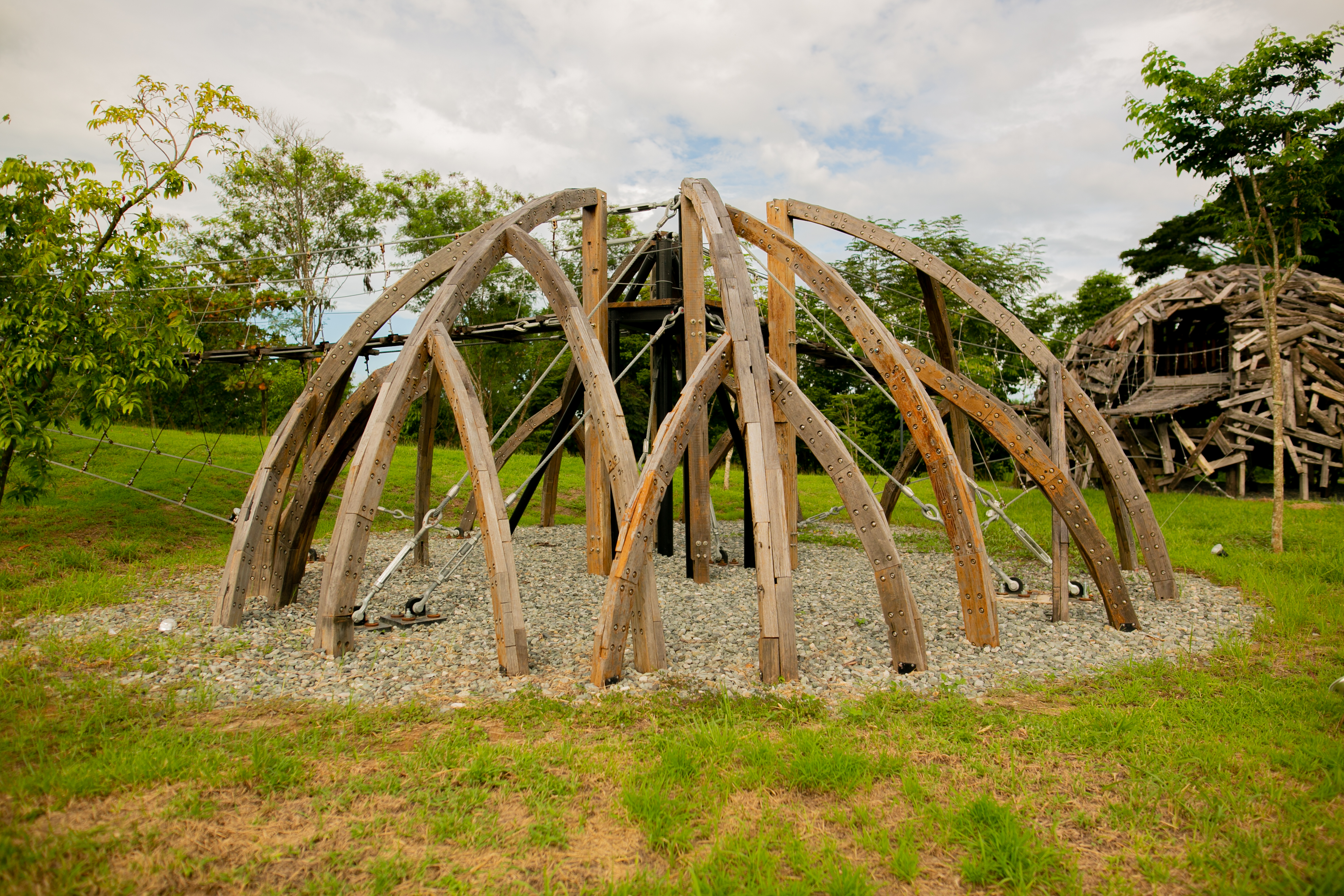 The geodesic dome is Superproject’s homage to Buckminster Fuller, the American architect who popularized the use of these lattice shell structures in architecture. Its 6.4 meter high shape started by projecting a subdivided icosahedron onto a 10.3 meter sphere, then deforming it on one side to form an opening for the third bridge. As a result, the structure is aligned with the forces from the bridge, avoiding the need for additional elements. The timber elements vary in size, following the bridge’s forces as they travel to the ground. The steel nodes, digitally produced using computer machining, are Superproject’s unique design, following their earlier 2015 ‘510’, and 2018 ‘Anodebol’ sculptures. 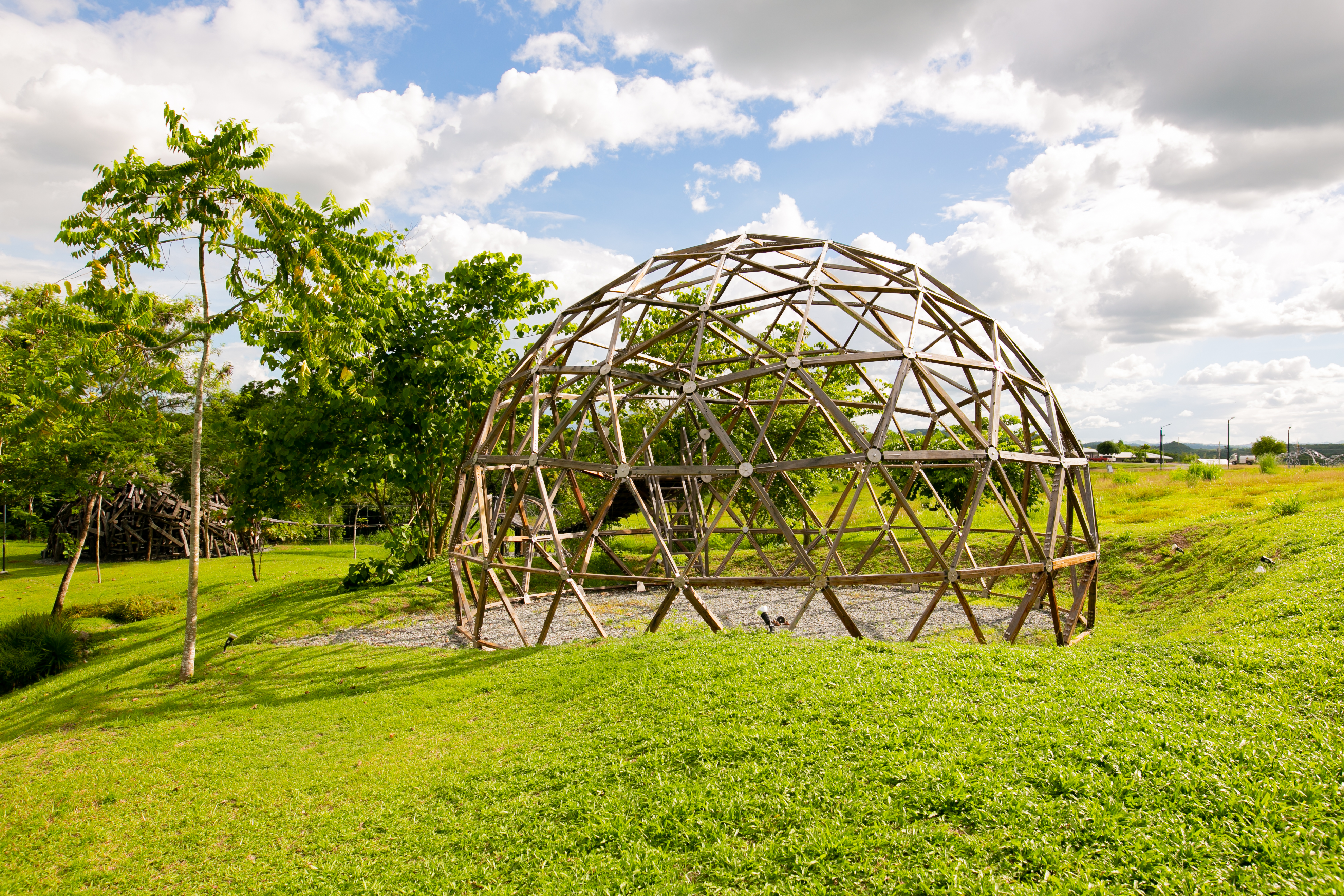 The Domes Village combines technology with repurposed timber, handcrafted to specification. The success and beauty of the structures, with the timber exposing its original grain, are a testament to the ingenuity and craftsmanship of the Filipino tradesmen. During the course of the SEA games, visitors young and old could be seen enjoying exploring and traversing the beautifully crafted domes, just as they were originally intended.