This dome offers a garden-like space for urban encounters. It is a temporary, double-layered structure, made of glued laminated bamboo. It is meant to become a hotspot in a now largely stagnant and grey part of town. Dealing with the water crisis, the spekboom plants in the dome are to be watered with purified urine. Summum Engineering investigated various patterns for the grid, offsets for the interior shell and cross sections of the bamboo beams, in order to improve structural performance and reduce cutting losses during production.

Centrally positioned on Luthuli Plaza in Cape Town, the Dome of Plants, designed by LOLA Landscape Architects and Nomadic Resorts, is a green and lush structure with a span of 20m and height of 15m. The dome is a lattice shell covered with plants, forming a spherical botanical garden that purifies the urban air, by hosting Cape Town’s most exquisite local vegetation. The structure is open and inviting, appearing as a semi-transparent hanging garden. At night it casts a mysterious green glow on the plaza.

Domes appeal to the need for protection in its simplest form: a shell that divides the outside world from a protected interior one; a communal bubble. Underneath the dome’s vegetated canopy there is 175 m² of indoor space and 175 m² of outdoor stage and podium area. Together they offer community space for discussions, events, workshops, exhibitions, meetings, lunch and a cup of coffee outside the big institutions, accessible to everyone. Its location, its bold and lush appearance and the innovative construction and application of technology will make it a landmark and symbol of sustainability for the city. It is an attraction, forming a hotspot in the cultural life of Cape Town.

The Dome of Plants boasts a minimal ecological footprint through the intelligence embedded in its design and optimization process. It is composed of mainly natural, biobased and living materials that sequester and convert carbon (wood, bamboo and plants). The dome’s vegetation captures moisture and is irrigated with purified waste water; a response to the recent Cape Town water crisis. The plants also lower surrounding urban air temperatures. Green, living structures like this dome, are capable of creating a habitat for birds and insects, as well as decreasing stress of people working and living in the area, and especially those visiting and interacting with it.

The primary structural material of the dome is glued laminated bamboo, which – like CLT – is an engineered product that optimizes structural values of the natural bamboo. Lamination provides not only strength but also versatility, as large members can be manufactured from individual bamboos.

The glued laminated bamboo is provided by MOSO, which reports that production in China, shipping, and end-of-life disposal can have a net negative carbon footprint. This is due to the significant reforestation and afforestation projects in China, increasing the carbon stock within the forest, and due to the substitution of fossil fuels.

Bamboo rapidly stores carbon in biomass and soil, and thrives on degraded lands, making the agriculture of bamboo one of the hundred most effective measures against climate change. 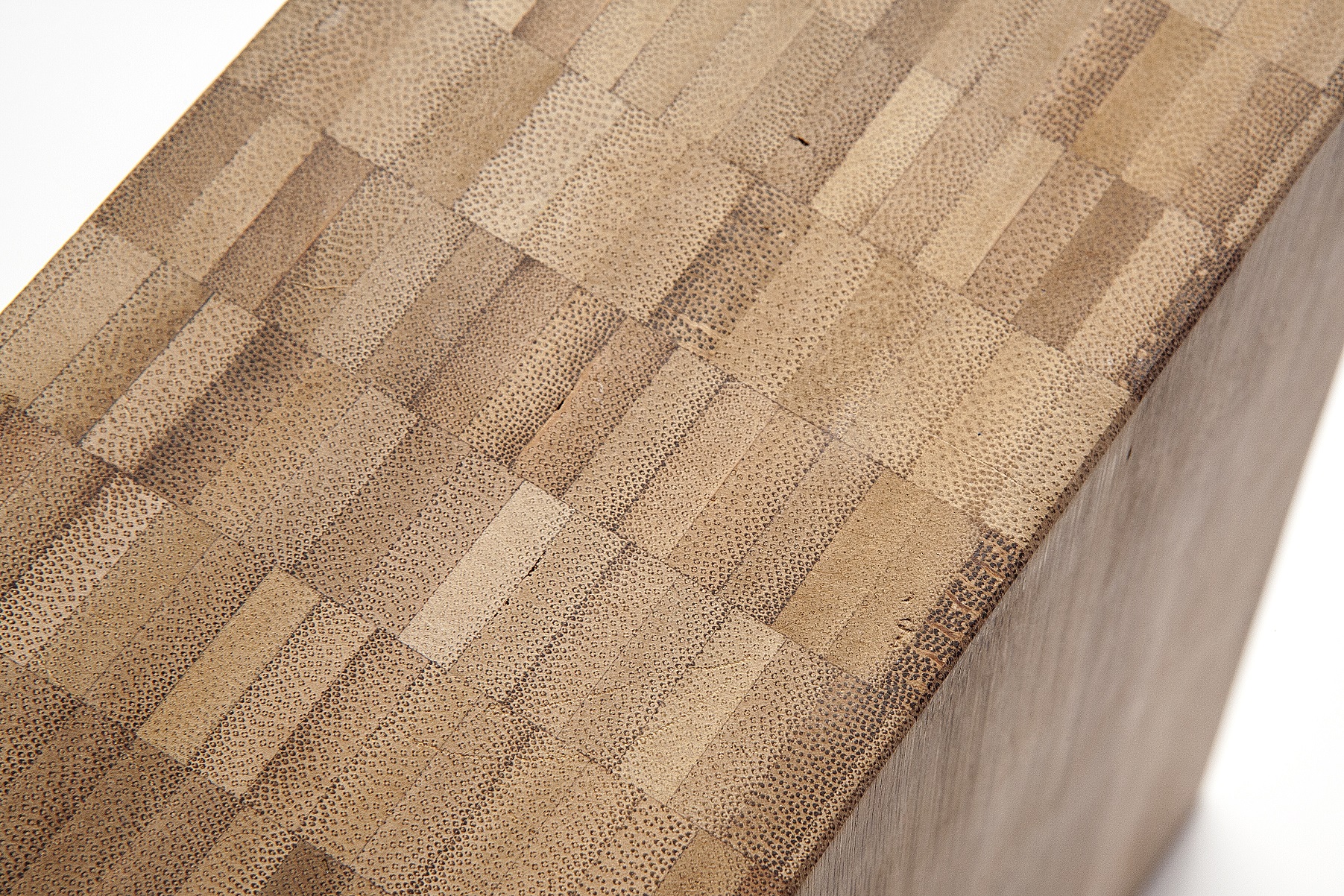 The structure of the Dome of Plants follows a pattern, reminiscent of a Fibonacci spiral pattern, which appears naturally in plants. This type of structure is also known as a lamella dome,  referring to a specific timber construction system, Zollinger lamella structures, named after engineer Friedrich Zollinger (1880-1945). The dome consists of two interconnected layers, creating an efficient spaceframe, a conclusion reached after preliminary engineering studies by Rogier Schuch. Summum Engineering created a parametric model to vary the divisions of the spiral grid in radial and vertical directions, and vary the offset between the outer and inner layers. 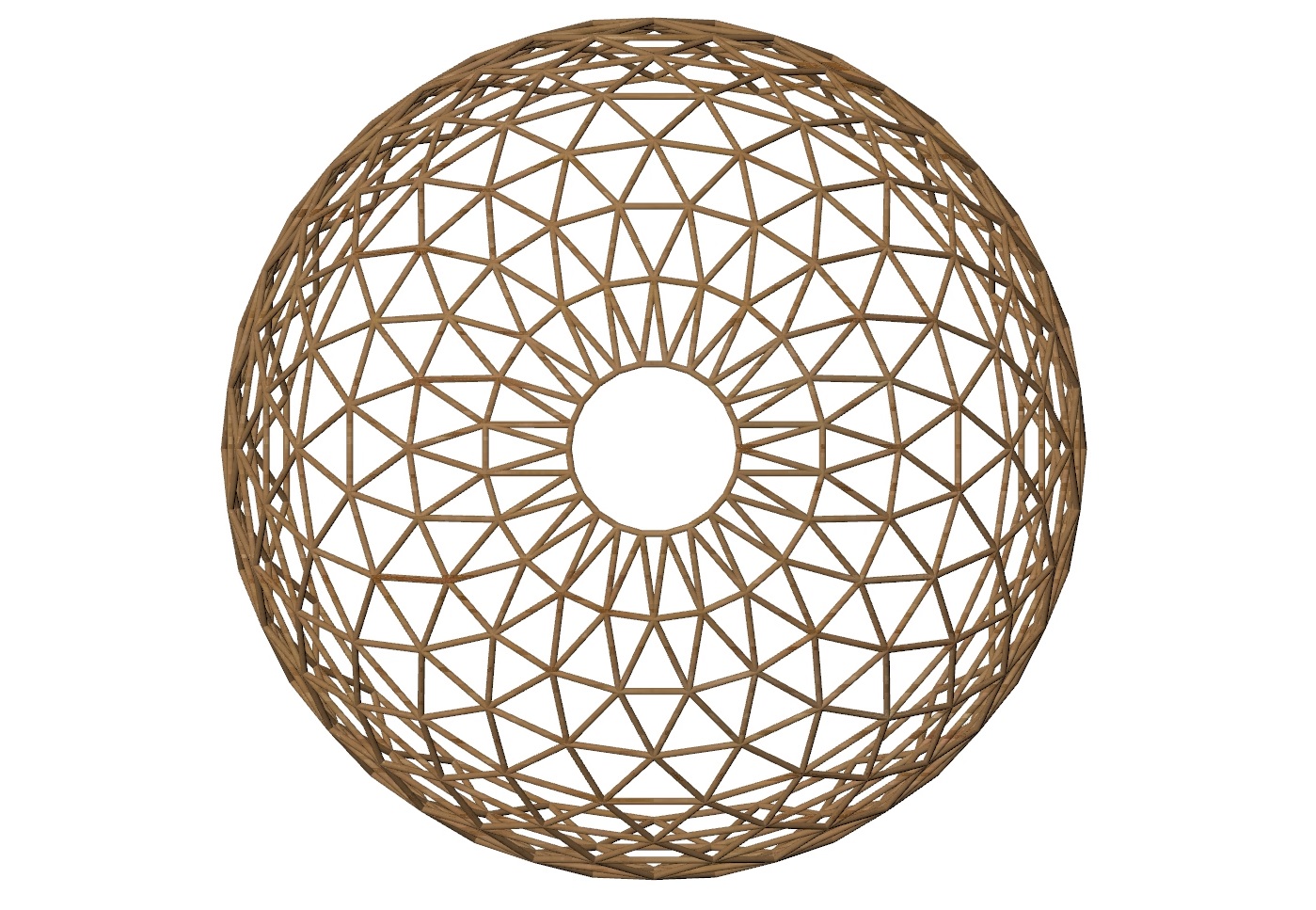 The wind load was determined using the South African code (SANS 10160-3:2010) for the extreme wind pressure, and Eurocode (EN 1991-1-4) for the so-called shape factors. The pressure for Cape Town is based on a design wind speed of about 140 km/h. This is well above those occurring during the 2017 Cape Town Cycle Tour, which had recorded wind speeds of up to 100 km/h, or even during the 2017 Cape storm cyclone with speeds up to 120 km/h. Shape factors were based on treating the dome as either a closed sphere, or an open lattice.

The weight of the plants was conservatively taken into account, assuming a soil-based system, to allow for flexibility in later stages of design. At the moment, the Dome of Plants has been envisioned with a hydroponic system in mind, which would weigh considerably less.

The dome’s cross sections were optimized, to achieve a minimal weight able to withstand these loads. The resulting structure has slender glulam bamboo beams at the top, increasing in size towards the base, as weight and forces accumulate. The optimized design contains no more than 10 metric tons of bamboo; about 10 kg/m².

For the Dome of Plants, Summum combined the lamella dome pattern with the compass method, developed at the Institute of Lightweight Structures, led by Frei Otto (1925-2015). This method was published in 1974 by Jürgen Hennicke and Eda Schaur, and was used to generate timber gridshells where all beams had the same length. This was done by using a compass to draw circles of the same radius along guide curves, and using their intersections as points for the grid.

The compass dome developed here is a unique invention. Unlike the gridshells, no guide curves are needed as circles radiate from a single point at the top of the dome. The result is the same: it has diagonal beams throughout that are all identical in length, simplifying construction and logistics. 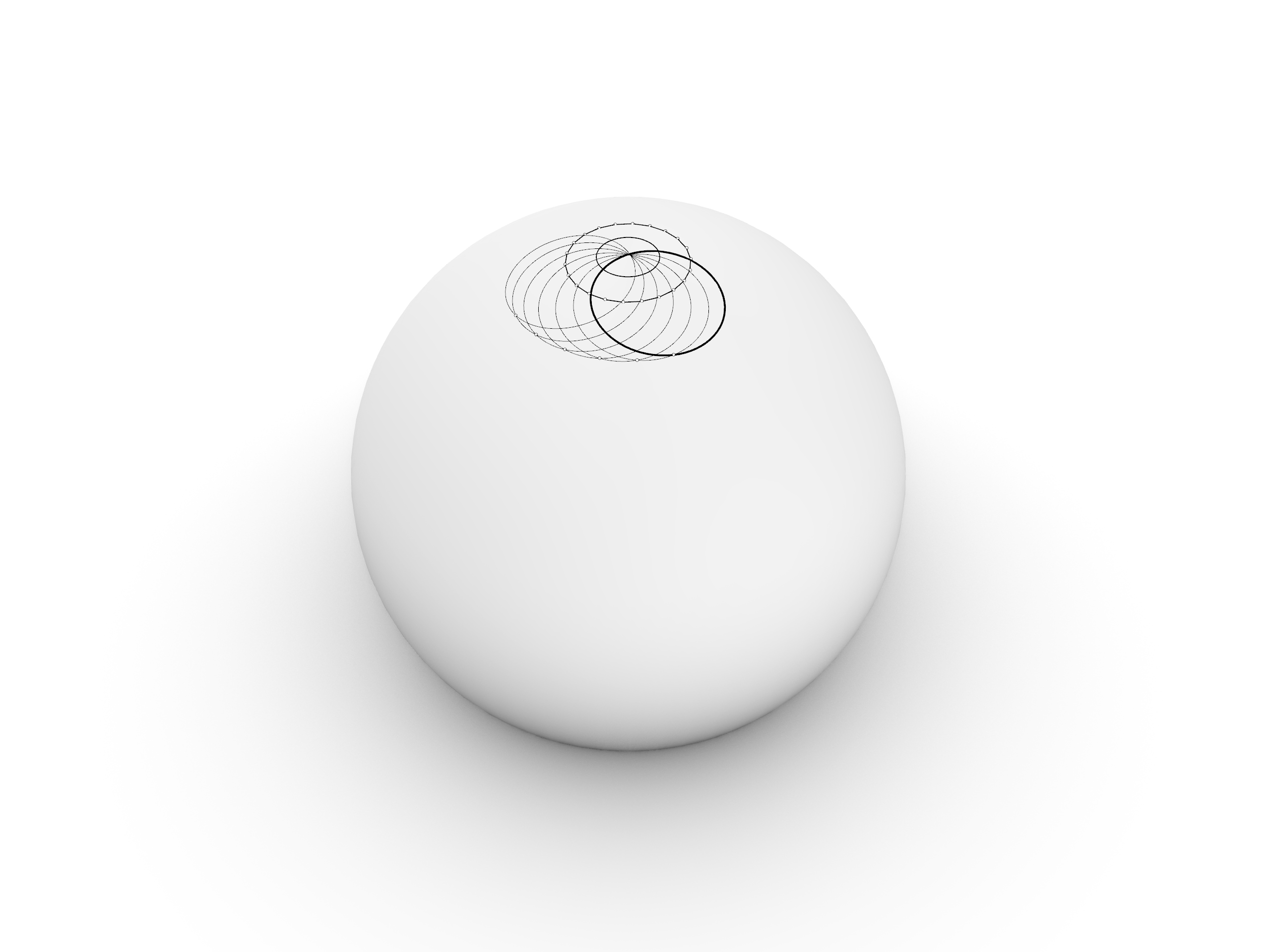 The structure has to be cut from standard stock lengths of glulam bamboo. To reduce the cutting waste, a cutting stock optimization was implemented within a parametric model. Solving such problems is not trivial, illustrated by our use of a seminal 1963 algorithm developed at IBM, and using a so-called integer linear programming solver, developed – in this case – at the Moscow Aviation Institute, and made accessible through software developed by academics at the Technical University of Denmark and UCLA.

By standing on the shoulders of these giants, it is possible to generate and optimize the dome and its pattern, in order to reduce the amount of waste during production. As a result, preliminary design variations already have less than 1.5% of waste. 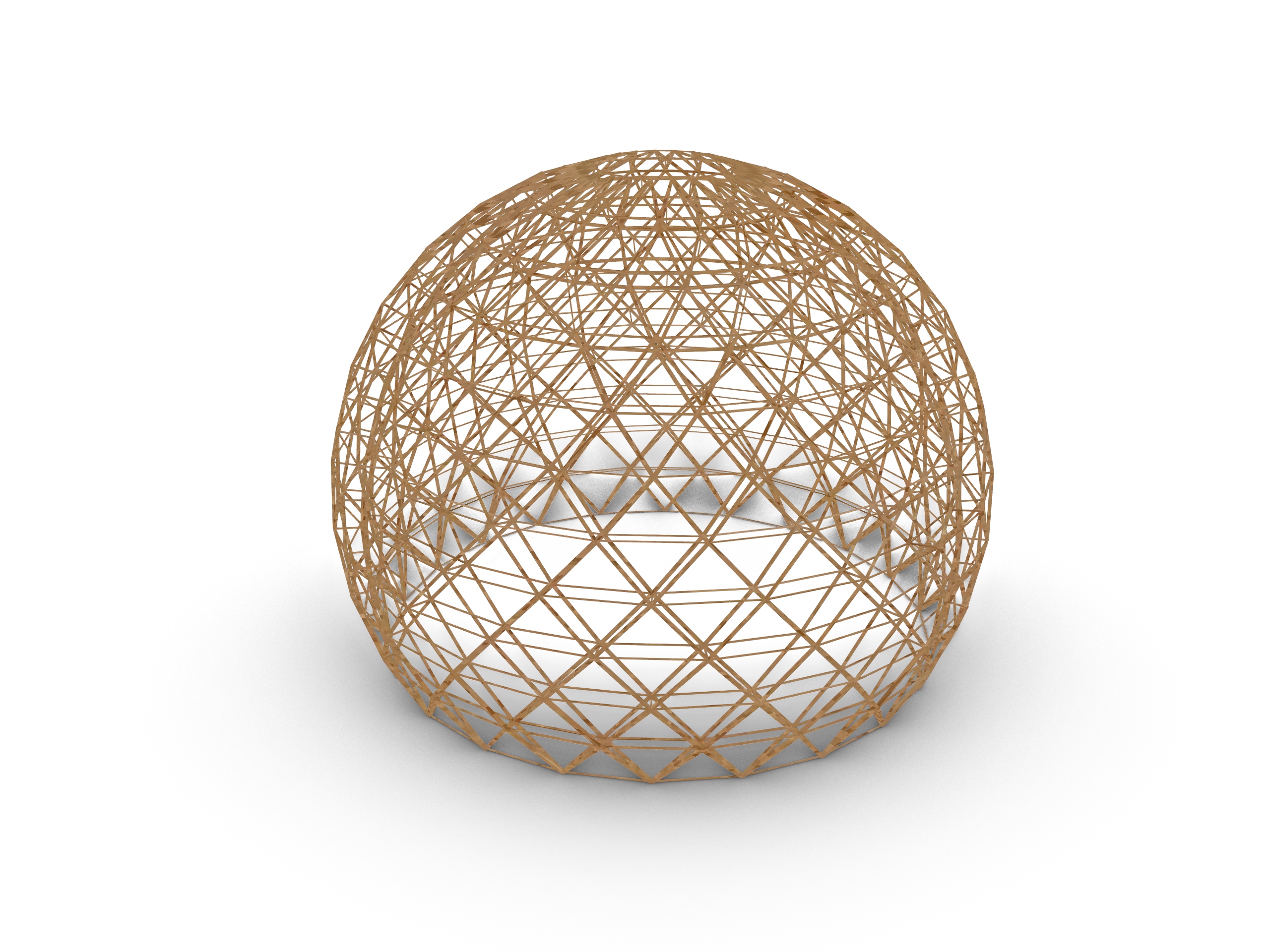 The Dome of Plants is a highly sustainable, biobased structure, that leverages hydroponic horticulture and waste water treatment to improve the urban environment and life in downtown Cape Town. A fully parametric design model allows for the simultaneous optimization of its structural and constructional performance, thus minimizing material use and production waste, and in turn, its embodied energy and ecological footprint.

The conceptual design for the Dome of Plants was presented during Design Indaba 2018 in front of 4500 attendees. Design Indaba is an organization and annual festival in Cape Town that inspires and empowers people to create a better future through design and creativity.